Why Fix the Best School? Because It's Broken

The Thomas Jefferson High School for Science & Technology is consistently ranked as one of the best public high schools in the country. We can debate the metrics that are used for such lists, but it's hard to argue with the results the school produces: Tons of exemplary students who gain admission to impressive colleges and universities and go on to amazing careers. TJ is a success.

So why would anyone suggest changing anything about the school? The table below shines some light on the problems.

Three things jump out at me from this table. First, Hispanic and Black students aren't even applying to TJ nearly as often as we would hope. Second, once they apply, the admissions test knocks many of them out of contention immediately. Third, it's an even worse picture for economically disadvantaged students.

If you look at these numbers and think "Well, the Asian kids are just smarter," then we have different assumptions about the nature of race, so you can just move on. I have no reasoned response.

If you look at these numbers and think "Well, the Black and Hispanic kids are not as qualified (through no fault of their own), and letting more of them in will significantly dilute the academic strength of the TJ student body," then we can have a reasonable discussion (though I disagree with you).

In a recent School Board working session, the Superintendent presented his TJ Admissions Merit Lottery Proposal, and I like it. For the first time, the admissions process can reflect the reality that many students could benefit from the rich experiences at TJ -- not just excellent test-takers. Most students who meet the new requirements (e.g., moving the minimum GPA up from 3.0 to 3.5) will be able to thrive at TJ. A few points:

The lack of diversity in TJ's student population has inspired hand wringing before. One question that struck me from this article was from an alumna who asked "Why are her white peers just noticing the problems now?" Honestly, I suspect that the declining representation for white students is a significant trigger. Nothing gets the attention of someone with privilege like being underrepresented. There are probably other reasons including the increased emphasis on equity in our society, but I'm a bit of a cynic.

Here are a few bold predictions:

I applaud Dr. Brabrand and the folks at FCPS who put together this innovative proposal. It will improve educational opportunities and outcomes across the county, and will make TJ a better place to learn.
at September 18, 2020 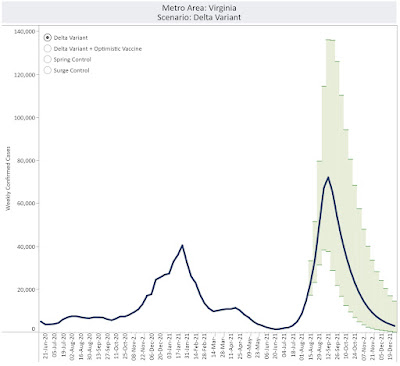